This is also a random variable distribution. A random experiment is conducted n times independently. Suppose E is one event of the experiment, P is its probability. If each time the event occurs treat it as success otherwise treat it as failure then probability for success is equal to P.
Probability for failure (say) q = 1-p → p+q =1.

Probability of getting r times success =

Now, the binomial distribution can be written as follow: 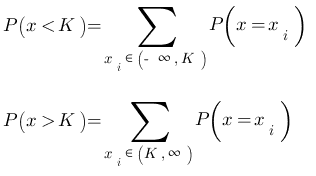 for any real number K.

Probability distribution function of a random variable X is denoted by F and is defined on R as follow:

If F is an imaginary function, then