Introducing the new ‘iPod shuffle’ the smallest mp3 player of the world and the world’s first talking music player. 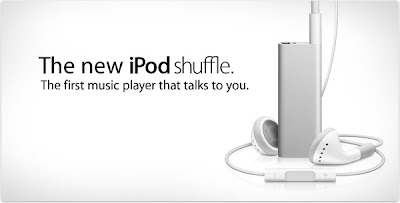 The controls are moved towards the cord of the ear bud which drastically helped to reduce the size of iPod shuffle and made it flexible for the user to operate and access them quickly. The size is astounding smaller, it is just 1.8″ tall and 0.3″ thin. Users can easily navigate through their favorite track and activate the Voice-over feature.

The Voice-over technology tells the user about the currently playing track, name of the play-list, artist and other information when the user press the clip down button. The user is also alerted with the battery power status and reminds the user of charging it when the battery is low. With this innovative feature in the new iPod shuffle it becomes easy for the users to switch between different songs and play-lists. The Voice-over feature in the new iPod shuffle supports 20 languages from across the world, which tells the users the titles name and artist information in the correct language.

The new iPod shuffle supports sync of the play-lists which helps the user to find the perfect mix of songs according to their mood or activity. This amazing small gadget has a storage memory of 4GB which stores up to 1,000 songs and comes with an amazing battery life. So get tuned into the next generation of mp3 player with the new iPod shuffle.

With such unique features and advanced technology, the new iPod shuffle is certainly leaving its huge footprints in the age of nanotechnology.