First of all thanks to Google Earth and a host of other collaborators for making ‘Rome Reborn’ which is said to be the first digital re-creation of ancient Rome available to all. All you need is Google Earth installed on your PC to discover and unveil the secrets of the fascinating Roman Civilization.

This phase of the digital recreation of ancient Rome is given as a newest layer in Google Earth named “Ancient Rome 3D”. 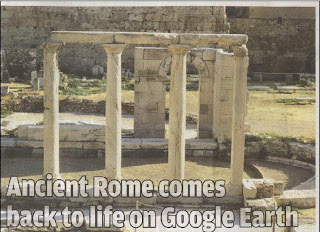 “Ancient Rome 3D” shows almost the entire city within the 13-mile-long Aurelian Walls as it appeared in A.D. 320. At that time Rome was the multicultural capital of the Western world and had reached the peak of its development with an estimated population of 1 million.
This 3-D simulation painstakingly reconstructs nearly 7,000 buildings of
ancient Rome, including the Colosseum, the Forum and the Circus Maximum. Moreover, pop-up windows provide information on the monuments and visitors also can enter some of the most important sites, including the Senate and the Colosseum, to observe the architecture and marble decorations.

A second click provides more advanced information, including a topographical encyclopedia, ancient literary sources, and bibliographical information about each building.

The “information bubbles” for “Ancient Rome 3D” have been translated into English, German, Spanish, Portuguese, French, Italian, Japanese, Russian and Dutch. Whether you are a student or a Scholar or a Historian, access to this 3D model in Google Earth will help everyone learn more about Ancient Rome.

How-To enable it on Google earth::

That’s it!!! You are now all set to fly over the city in Google earth to explore more than 6000 3D building including many in high detail.

Enjoy your visit to Rome.
Try it out n do post in your valuable comments.