The HTC One series of Android smartphones was well appreciated by users all over the world and this month the company has released the latest iteration in its series. Its newest flagship HTC One smartphone runs the latest Android Jelly Bean 4.1.2 which means it comes packed with all of the newest features from Google. But first let’s take a look at the hardware and features you can expect from this new device, and how it compares with the competitors in this space. 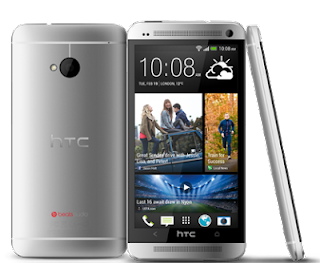 The device itself is made of aluminum uni-body poly-carbonate material, which is a lot of words to say it is made of a single part without any seam, and feels solidly built. HTC placed a lot of design engineering into this new phone, making it their top of the line model.

The screen is also the latest generation that HTC is offering with a 4.7″ display providing 1080p picture quality on a Gorilla Glass LCD screen. On the front can also be found two large dual stereo speakers which provide a much louder sound than what most phones are capable of, thanks to BoomSound enhanced audio production. The speakers are several times bigger than what other comparable phones offer. The sides are fairly barren with a single volume rocker, and a power button on top.

On the back is the 4 MP camera using UltraPixel technology which provides up to 300% more light to the sensor, which in turn returns in much brighter images and videos. This camera can do full HD and a flash allows it to take night time images as well. The front also boosts a camera for video conferencing. Inside the HTC One is a Snapdragon quad-core processor running at 1.7GHz along with 32GB to 64GB of storage, depending on the model.

The interface itself provides all of the basic Android features along with some extra additions from HTC. The UI runs Sense 5 which is the typical HTC interface, but this phone also has BlinkFeed, which is a home screen that provides feeds from a large number of places, including news, weather, and even TV channels.

The HTC One also has an IR port on the top which works with the app in order to control a nearby TV, sending commands to change channel and display a specific show on the TV screen. The camera app has also been redesigned to provide a more intuitive interface, and HTC is introducing the concept of Zoe share, which is a function that takes short videos and then allows you to upload and share them automatically to various social networks.

The HTC One will be available starting in March and over the coming months around the world. It provides full LTE support along with world-phone connectivity, along with the typical Wi-Fi, Bluetooth and even NFC support in some markets. While HTC has not been gaining a lot of market share in the Android world, the company is putting a lot of hope on the HTC One to bring it back into the game and provide what customers want in a high end phone.