The email message that began circulating these days claiming Ericsson will give away a free laptop computer to those who forward the message to 8-20 or more people is just a hoax and a dream unlikely to ever come true. 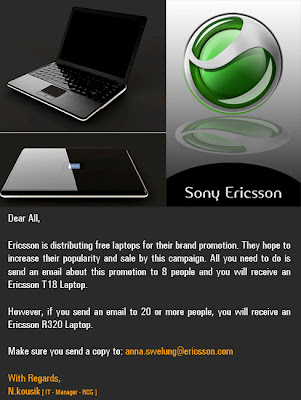 Being even more absurd than usual hoaxes, the above graphical version of the mail that hits your inbox claims to give away laptop models that never existed. Both Ericsson T18 & Ericsson R320 mentioned as laptops in the mail are actually older mobile phone models of Ericsson that have now been discontinued.

In the Recent press releases, Sony Ericsson published the following message regarding this ‘Hoax Competition Email‘

Sony Ericsson has been made aware of an online email campaign claiming that Ericsson will give away a free laptop computer to users who forward the promotional information. The same campaign includes a photograph of the Sony Ericsson logo and mentions an Ericsson contact name and email number.

Please do not reply to or forward the email if you receive it.

This is neither a lottery to try your luck nor a competition that demands your skill, but just a hoax that is targeted on those donkeys out there who wants all for FREE!!

To be frank these days not even death is free. Doctors try to keep you from dying. Then you get the bill! Isn’t it so?