Twitter recently introduced its official Top Tweets account that employs a special algorithm to track and retweet some of the most interesting and popular tweets spreading across Twitter. 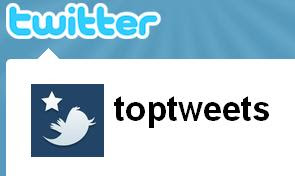 Much to my surprise, I found by visiting the account that it is following everyone on twitter and its locations is set to everywhere. I haven’t seen such an account on twitter till now that can follow everyone and located everywhere. That’s the greatness of toptweets.

So, Where in the world is Top Tweets?
It is present everywhere and following you too!