Whenever you encounter issues with your ISP’s DNS servers set for your network connections, there are chances that you cannot access your favorite website, or the servers becomes so busy that it slows down to the point that it doesn’t respond and sending packets becomes a snail’s pace. This is a common problem faced by DSL subscribers and rarely by ADSL Broadband users as well.

Google Public DNS is a new, simple, and much faster when compared to openDNS and comes very handy in cases when DNS servers of your Internet Service Provider aren’t responding in a timely manner. Head-on to my previous post to know – How to Setup Google Public DNS IPs for Your Internet Connection

On a server ping test with command prompt, you can notice that the Google Public DNS servers responding swiftly when compared to that of OpenDSN server ips’.

Although Google Public DNS is trying to impose an edict on the internet access, BSNL Broadband service which is most common and famous in India, provide server speeds that blows Google Public DNS way out of the water with an approximate round trip time that ranges between 25-40ms with absolutely 0% loss most of the times. 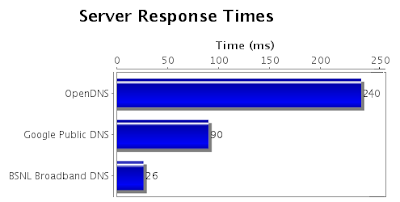 As you can notice from the chart, BSNL Broadband DNS ping response time is just 26ms and is much faster when compared to that of Google Public DNS and OpenDNS.