Telugu language, well known as the Italian of the East is one of the most spoken languages with over 85 million people speaking in Telugu not just in Andhra Pradesh, India but also those living in USA, UK, Africa, Mauritius, SE Asia etc. Owning to the interest of speaking and writing in Telugu, there are many famous Telugu websites and blogs. Now let’s make use of some Telugu installing instruments like Google Input Tools and others and learn how to type in Telugu.

Shifting to Telugu, English in the language bar, we can utilize the language required. In this also because the keyboard being used is Indic, if typed in English, it will convert into Telugu.

Who knows mere English typing, wants to convert from English to Telugu, this Indic keyboard is better. If we type the English words in phonetic procedure, Telugu words come just like in Google Transliteration. 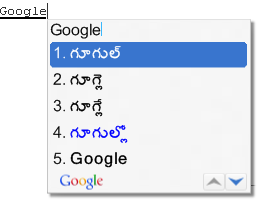 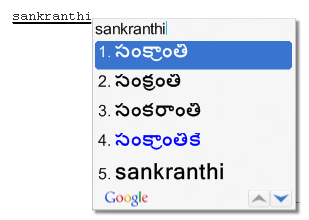 But if anybody feels difficult to think for every Telugu sentence in English phonetic, other keyboards will be very useful. There are different types of Telugu software tools in use and their keyboards will be according to the respective tool. Maximum percentage of people will use Apple keyboard. If you know the Apple Telugu keyboard typing, download it and by clubbing language bar with the same Apple keyboard, Unicode Telugu typing can be done. To say as how Telugu typing is being done by using Anu Script, in the same way from Unicode also typing can be done.

The installation process is very easy. After zip file will be downloaded, do un-zip, execute and then we will get the Apple Telugu keyboard layout option in language bar. Keeping the Apple keyboard layout before, if practiced, Telugu typing can be learnt speedily. If we have English keyboard typing experience it will help much and due to this we can type without seeing the position of the keys. According to this, if we can remember the Telugu letters on each respective keys, easily Telugu also can be typed directly. If we are using different keyboards, we can change among them by using the shortcut ALT+SHIFT

Besides Google Input Tools and Apple Telugu keyboard layout, to type in Telugu here are two other tools which are very useful and can be installed and utilized suitably: