Here’s some mind-blowing optical illusions that’re being tweeted around and shared quite a bit on Facebook and other social media sites which tricks your eyes and your brain. For some it’s really interesting, nifty optical illusions and for others it’s a miracle in front of naked eyes.

Whomsoever tried these visual illusions for the first time, can’t help themselves from being fascinated and held spellbound thinking how can this actually happen. Wow! Amazing! Awesome! Great! Superb! Fantastic! Cool! all used to commend these illusions for being very impressive. Don’t believe? Just try it to believe it!

In the images below, first look at the colored dot on the nose or on the forehead for 15-30 seconds and then look at the blank or white space or at a white ceiling or white wall and voila, you have the original face in its actual colors appear in your vision.

Note: If the original face will not last long and seems to fade away quickly, then just blink the eyes couple of times and then you can see the face properly for a few microseconds more. 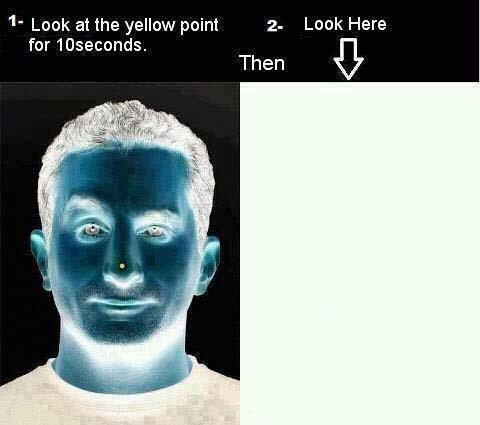 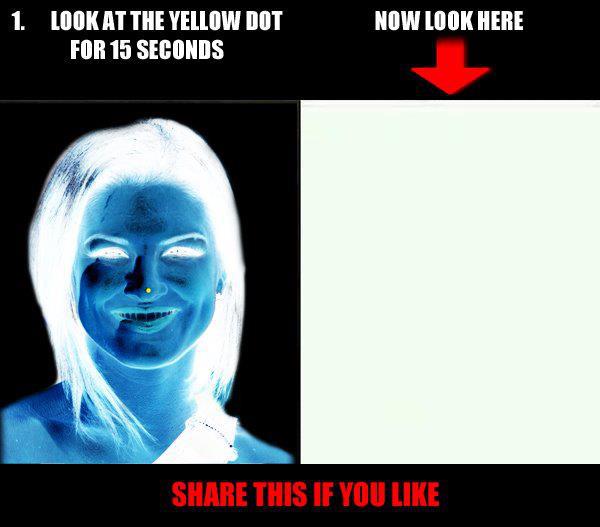 First, lets know how the image continues to appear in your vision, even after looking away from it.

This is due to an optical illusion of the image called “Afterimage” wherein the image you stare at for a significant amount of time continues to appear in your vision ever after looking away from it. These afterimages last for a few seconds and they get refreshed or re-triggered with every eye blink in that time span. The higher the contrast of the image you stare at, the stronger the visual clarity of the afterimage. One of the most common afterimages you can view is of the Sun. When you glance at a very bright light like the Sun and then look away, you’ll still see a glowing ball like image for a few seconds which is nothing but the afterimage of the Sun.

Okay, we now know why the face image still continues to appear in our vision, even after looking away from a direct gaze at it. But we still have to find out:

Why the face of the person seen as afterimage is non-negative and has face color mixing far different from the initial image.


To understand the science behind this and know what’s really happening, we’ve to put some light on the concepts of colors of light, the combination of light colors and negative afterimages.

In colors of light, additive primary colors are red, green and blue (RGB).
Additive secondary colors of cyan, magenta and yellow (CMY) each of which are formed by combining equal amounts of two primary colors. 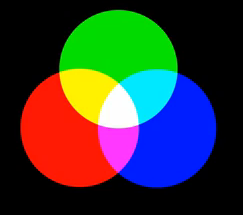 One has to understand that here the combining of colors is of the lights (or wavelengths), not of pigments. The result of combining colors as pigments is very different from light.

For example, in case of pigments such as paint colors or dye, the more color you put in, colors subtract and less color you’ll end up with which means you’ll get closer to black color. That is the reason why in pigments, mixing blue and yellow colors make green. Whereas mixing blue and yellow light make white color. This happens because of the fact that lights are different from pigments in the sense that more the colored lights you put in, the colors become additive increasing brightness and you’ll get closer to white, which is the mixture of all light colors.

By combining or mixing of light colors in equal amounts, although it may seem a little strange,

Afterimages are of two forms: positive and negative. Here, we are only interested in negative afterimages which are a retinal phenomenon and come with inverted or complimentary colors as seen in the visual illusions above. This happens mainly because of the illusionary aftereffect brought on by the adaptation of particular color receptors.

As you may already know, eye’s color receptors better known as cone cells or cones are of 3 types, each of which is most sensitive to either of three main colors we see red, green and blue. When you stare at a particular color for a significant amount of time what happens is that your cone cells which correspond to that color eventually become adapted, tired or fatigued and stop responding.

Then on diverting your eyes to a white background (or blank space), the receptors adapted specifically to a color send a weak signal and those colors remain muted. So there is higher activity in surrounding color receptors which are still fresh and send a out a strong signal to the brain. As the signal sent from all of the three different color receptors (Red + Blue + Green) is not in balance to see white color, brain sees colored afterimages which are nothing but the paired primary colors.

This visual illusion of negative afterimages vanishes as the receptors are given a few seconds to rest.

If you have any doubts, suggestions or corrections, please post in comments.
Thank You Very Much!!