Are you a Facebook stalker? Honestly, you probably are. Most Americans spend more than two hours per week on Facebook, and much of this time is spent checking out their crushes, exes, and rivals on the social media service. 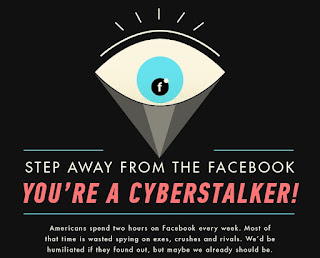 A “stalker” is defined as a person who is constantly following, watching, or communicating with someone that doesn’t want the tracking and attention, and — though laws vary by state — incorporating threats into your interactions.

So, maybe you’re not a stalker. Maybe you’ve never looked through someone’s entire timeline. But, how open to stalking are you? According to this graphic by Online College Courses, 63% of Facebook profiles are public to other users, making it easy to track people’s online lives and the information they share.

Facebook is the easy favorite among criminal stalkers, with 16% preferring this service versus Twitter, Craigslist, and other online social portals. U.S. college students are every bit as bad as the criminals, with more than four-fifths admitting to snooping on an ex’s Facebook, and two-thirds admitting to creeping on the profile of an ex’s new flame. Posting pictures of yourself, making your profile private, and posting passive aggressive song lyrics are just some of the ways that college kids attempt to provoke those that burned them romantically.

Beware of this behavior, as regularly checking up on an old flame is more likely to lead to experiences of loneliness, jealousy, and heavy drinking. And Facebook stalking those that you’re not with isn’t productive, either — 20% of 2009’s divorce papers in the U.K. referenced Facebook infatuations and affairs. Don’t leave yourself open to being stalked, or to stalker-like online behavior.