Virtual reality games have become more and more popular since developed, and there are many game developers exploring a whole new way of making and presenting games. From Oculus Rift, to the HTC Vive, VR headsets are helping gamers immerse themselves and experience a whole new level of sensory input. Meanwhile, game players also worry about something. What game players fear is that saved game progress lost when they restart game, or reinstall Oculus Rift for instance. Is there a product to solve the problem of moving, backing up and restoring its installation directory in the market? Don’t need worry any more, since a brand new free tool coming into being, that is vrBackupper, released by AOMEI Technology, which known as the easiest backup service provider.

vrBackupper is a free and easy-to-use Oculus Rift backup, restore and migration tool.

VR Backupper is the first backup program that designed to safely backup, restore and migrate Oculus Rift. It’s totally free and very easy to use. The program comes with a user-friendly and clear interface, and support Windows 10 64-bit.

Backup Oculus Rift and its inclusions 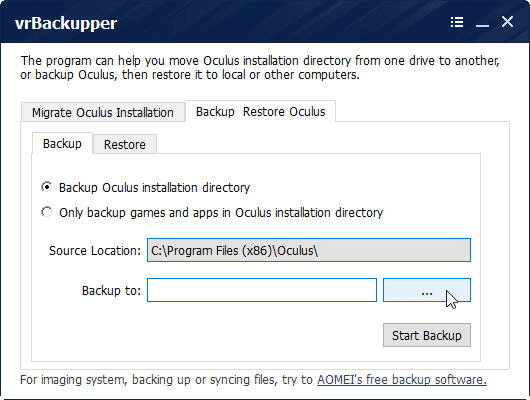 vrBackupper can backup and restore all data in Oculus Rift installation directory.

Restore Oculus Rift back and save all settings

When original Oculus Rift gets damaged, use vrBackupper to recover all data as well as personalized settings back. Some Oculus users also want to play their games on a better equipped computer to have a better experience. However, re-download all its games on the new machine is troublesome especially when the download speed is low. Yet, you can backup Oculus games and installation directory from old computer and restore them to the new one with vrBackupper all in a quick process. After restore, you can still continue your game from the latest saving point.

By default, Oculus installs and saves all the games on C: drive and only the new version of Oculus allows you to save Oculus installation to other drive. With more and more games saved to C drive, new downloaded games usually encounter a problem that there may be not enough space for installation. Thus, move Oculus installation directory and all its games to another non-C: drive with vrBackupper is an intelligent choice. 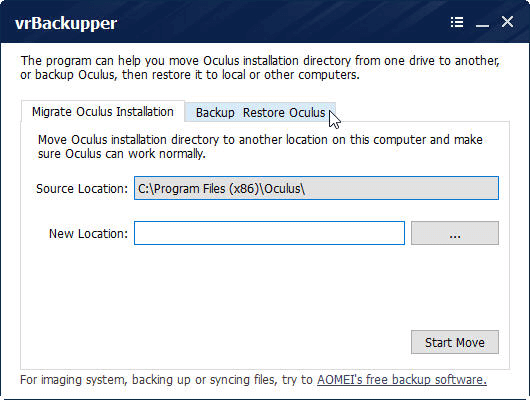 Free move oculus Rift installation directory to a different drive instead of system partition to free up C drive space.

Conclusion:
vrBackupper is a completely free tool designed to backup and restore Oculus Rift and its games, apps, etc. It can also move Oculus Rift installation directory to other drives instead of system drive to avoid low disk space problem.

Tips:
vrBackupper is only designed to backup and restore Oculus Rift and its games, if you need full scale PC backup software, you are recommended to use AOMEI Backupper. The latest version 4.0.2 added many new features, such as added real-time file sync and support to backup or sync files to cloud drive. You will love it!