A little more than 3 years ago, after working on several projects such as online storage cloud, several different converting tools and a complete online document management system, Cometdocs released the first set of mobile apps. Today, Cometdocs has more than 20 different iOS apps to offer, some of which are among the best in their niche. In late May this year, most of those apps received a major overhaul that set these apps in a whole different league. 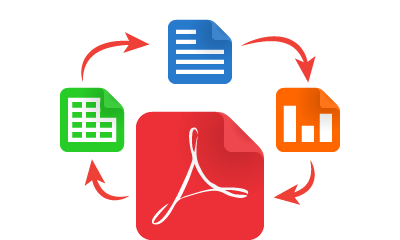 PDF to Word is a free mobile app for iOS users developed by Cometdocs. With outstanding conversion quality and option to import files from various cloud storage services PDF to Word stand out when compared to other PDF to Word converter app.

Have you ever found yourself with a PDF file that is just hard to look at? PDF file can often be very hard to work with since their primary function is read-only. However, with PDF to Excel on your mobile device, in just a matter of second you will be able to have it converted into .xlsx format and as such, your new file will be editable and searchable as well. You can import your PDFs from several cloud storage services, such as Gmail, Google Drive, Dropbox, Box and OneDrive, which gives you a much easier access to the files that need to be converted. The conversion outcome is one of the best in the game, and the converted file’s layout remains the same as it was in the PDF, with all tables, shapes and content remaining in place as well.

This is the app most of us needed back in high school and college when we missed classes because we had a cold, headaches or were just too tired for class because of our late night study sessions. You probably remember hundreds of notes your friends took for you and passed them on to you and the troubles you went through when trying to read and decipher what they wrote. Image to Word will scan the photo you want to edit, and then convert it to .docx so that you can go through it, copy/paste notes, search through your receipt, and write whatever you need at that given moment. You can import photos from your device’s memory, or simply make a snap on the spot with one the device’s camera and have it converted instantly. The best thing about Image to Word is that it is powered by such a tremendous OCR engine that you can even convert screenshots.

Save as PDF – All in one PDF Converter

Save as PDF is another very useful app when you find something you need to save on your mobile device. Since PDF is a universal file format when it comes to converting it, once you have it on your device you are set to have it in any other format as well. Save as PDF is much easier to use then trying to save it through your phone since this app will allow you to import files from Gmail, Dropbox, Google Drive and more, and convert over 10 different file types, and 20 different formats, all into a single, standard PDF. Among other things, some of the more popular file types to convert from are MS Word and Excel, Text files, PowerPoint, OpenOffice/LibreOffice and image files as well (.jpg, .jpeg, .png, .bmp…)

All Cometdocs apps are available on both iPhone and iPad, so feel free to try them out, make sure you give them as many stars as they deserve and leave a short review for future users to know what they are getting!